Without Kevin it's very quiet in the house. But the young ones give us a lot of pleasure, love and hugs.
Everything is setteling down a little bit. The first two days after Kevins death, Jayson was sitting in front of the window, waiting for him to come home. But now he's trying to play with the little ones. Between Mike, Dylan and Mango is a little bit of a playfull fight over who will be the new boss in the house. Mike is still in the winning mood.

This weekend we organised a beaglewalk for the beagleclub, there were about 65 persons and 45 dogs, including 1 Hamiltonstövare and 2 labradors. It was a nice walk, but in the first ten minutes of the walk we lost a couple of beagles. In the beginning it were 5 ( including our Mike and holidaydog Max) but 3 followed us shortly. And 2 of them were still missing. (a mother and daughter) After the walk of two hours those dogs were still not there. So Tjeerd, the boss of the dogs and some other people stayed to search for them. I with the rest of the people returned to the restaurant for some soup. At about 5 o'clock Tjeerd got home together with the bosses of the dogs. I served a cup of coffee to them and at about 5.30 we went to the woods again . But it was dark and quiet there and we didin't find the dogs. At about 8.30 in the evening we left the woods and went home again, without the dogs. The next morning Tjeerd got up very early and was in the woods at 6.30. But he still didn't find them. At 9 The boss of the dog came to pick me up and we walked the whole route again. But still nothing. At about 1 we stopped the search and went home. Tjeerd was still at work and driving through the woods with the car. At about 3.30 he did one last lap through the woods and he saw two deer standing next to the water, looking at something. When he looked arround he saw one head sticking out of a bush. He recogniced it was a beagle's head and he called out to them. So a second head appeard. The firts one he could easely catch, the second one was a little bit more of a hassle. But in the end I got here also. So at the end of the day we could deliver the two dogs to the owners. They had been gone for about 30 hours!!!! It was an experience to nevr forget end never hope to do again.
So it was an strange end to a strange week. 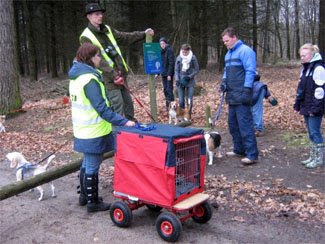 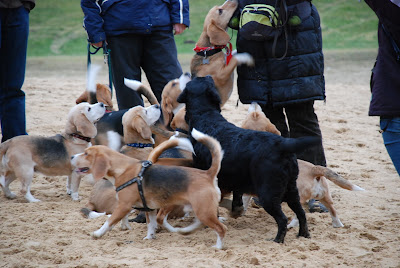 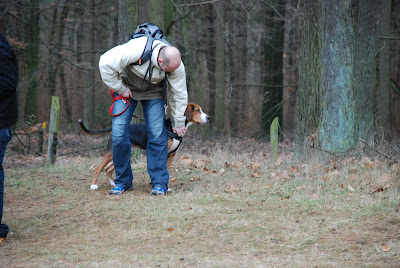 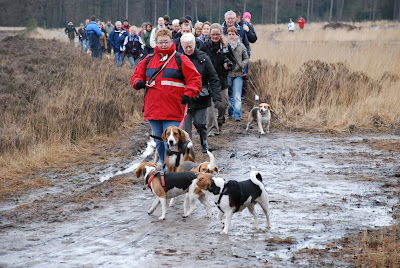 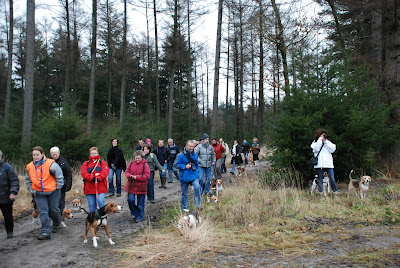 Pleased to hear you found the Beagles..it must of been very worrying.

Thanks for the email, I will reply a little later....

Love and hugs to you all...a BIG kiss for Mister Mango.

Very good, Tjeerd, you find the lost beagles!
Mango looks very strong on the photo with the lady holding him.

Love to you all
from
Monica
PS Milla is sleeping now